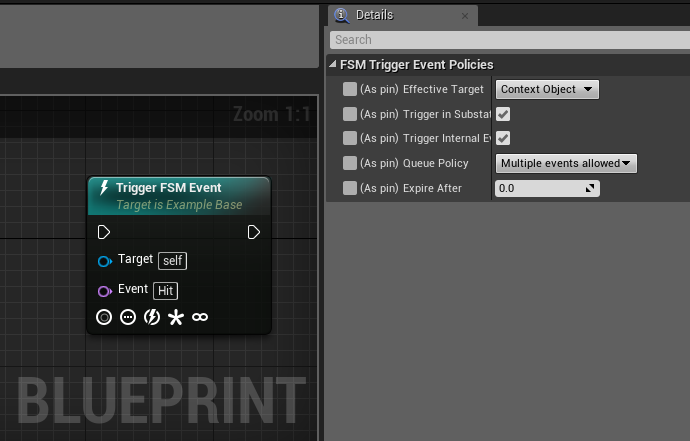 This is a detailed breakdown of what happens when an event is triggered with the TriggerEvent node:

Notice that the Trigger Internal Events and Expire After policies are stored in the queued event since their effect will be applied when the event is processed.

All context objects perform their event processing by registering to a specific engine tick event, more precisely the “UWorld::Tick – TickObjects” part of the world tick. Such event happens after TG_PostPhysics tick functions, but before updating the camera. For each context object, all the top-level FSMs are considered in an unspecified order. This is a detailed breakdown of the tick processing for an FSM:

Notice that if an FSM has no active state on a specific tick, for example because the execution flow is stuck on a latent function, the tick processing is skipped entirely. This means that the FSM still receives and queues events, but it doesn’t process them.

Since context objects register themselves directly to the world tick, they still work and process the events even if their are run by an actor whose tick function is not running. If you need to pause the FSMs, you can use the Pause FSMs blueprint node. Notice that if you do that, all FSMs and sub-FSMs of the specified context object will be paused. Pausing means that the tick processing described in the above section will not be performed, therefore:

You can check whether a context object has its FSMs paused using the blueprint node Are FSMs Paused.

Running FSMs while the game is paused

If the game is paused, for example with the Set Game Paused blueprint node, all FSMs of all objects will also be paused. If you desire to have the FSMs of a specific context object to run even if the game is paused, for example in order to drive a menu system, you can use the Should FSMs Run While Game Is Paused blueprint node. As with the pause nodes described above, this will affect all FSMs of the specified context object.